Could modified train cars capture carbon from the air? This team has a plan to make it happen 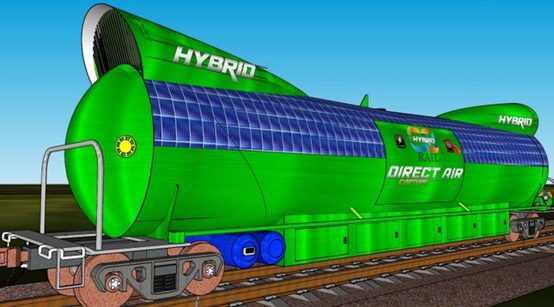 Direct air capture technology removes carbon dioxide from the air and compresses it for sequestration or utilization and promises to help us meet net-zero emissions goals. However, the process of direct air capture can be energy and land intensive and expensive. To design a direct air capture process that uses less energy and less land, a multi-disciplinary team outlines a plan to retrofit train cars to remove carbon from the air at a much lower than average cost per tonne in an article published in a peer-reviewed article in the journal Joule on July 20.

Stationary direct air capture facilities require large areas of land to house their equipment and construct the renewable energy sources required to support them. Obtaining the proper permits to operate can be difficult, and many residents are opposed to the construction of these large facilities in their towns and cities. “It’s a huge problem because most everybody wants to fix the climate crisis, but nobody wants to do it in their backyard,” says co-author Geoffrey Ozin, a carbon dioxide utilization chemist and chemical engineer and director of the solar fuels group at the University of Toronto. “Rail-based direct air capture cars would not require zoning or building permits and would be transient and generally unseen by the public.”

These purpose-built train cars use large vents to intake air, which would eliminate the need for the energy-intensive fan systems that stationary direct air capture systems use. After a sufficient amount of carbon dioxide has been captured, the chamber is closed, and the harvested carbon dioxide is collected, concentrated, and stored in a liquid reservoir until it can be emptied from the train at crew-change or fueling stops for direct transportation into the circular carbon economy or to nearby geological sequestration sites. The carbon-dioxide-free air then travels out the back or underside of the car and returns into the atmosphere.

When a train pumps the brakes, its energy braking system converts forward momentum into electrical energy. As the braking system is applied, the energy is dissipated in the form of heat and discharged out of the top of the train. “That is wasted energy,” says lead author E. Bachman, founder of CO2Rail. “Every complete braking maneuver generates enough energy to power 20 average homes for a day, so we’re not talking about a trivial amount of energy.” This energy, the authors suggest, should be used to help mitigate climate change.

The authors argue that direct air capture becomes an even more viable climate solution because the rail system is already in place. “The infrastructure exists,” says Ozin. “That’s the bottom line. All you need to do is take advantage of what is already available.”

The researchers say that an average freight train with these direct air capture cars could remove up to 6,000 tonnes of carbon dioxide per year. Because its sustainable-energy needs are being supplied by on-board sources, the price per tonne is significantly lower than that of other direct air capture systems. “The projected cost at scale is less than $50 per tonne, which makes the technology not only commercially feasible but commercially attractive,” Bachman says.

The authors hope this technology could have a positive impact beyond the carbon it removes from the atmosphere. “We could get a positive-feedback loop where the encouragement of rail to broadly deploy these direct air capture rail cars could even further decrease carbon emissions because rail is about five or six times more efficient than trucks,” says Bachman. “By increasing rail utilization, you increase the efficiency of the entire transportation system.” See full story at Joule.