Congratulations to Lu, Chengliang and Geoff on their recent publication in Nature Communications 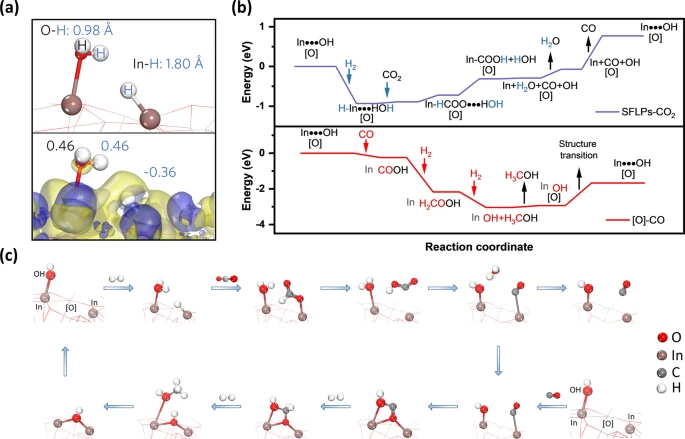 CO2-to-methanol catalysis is an appealing way for the production of solar fuels. The benchmark catalyst is the decades-old Cu/ZnO/Al2O3 that demonstrates high stability and high activity, but it should be operated under high hydrogen concentration (>75%) and high pressure to suppress the competing reverse water-gas shift side-reaction (CO2-to-CO). In a recent work, Lu, Chengliang, and Geoff showcased a black In2O3-x(OH)y catalyst that can shift the competing CO and methanol production to cooperative one. To amplify, the hydridic In-H and protonic In-OH in the catalyst forms surface frustrated Lewis pair (SFLP) to enable facile CO2 activation to CO, with the SFLP degraded to oxygen vacancy. Fortunately, the produced CO can be captured by the oxygen vacancy and be transformed into methanol on site. After the desorption of methanol, the oxygen vacancy is recycled to SFLP upon H2 heterolysis. As a result, the methanol synthesis over In2O3-x(OH)y is promoted by the CO formation, surpassing the Cu/ZnO/Al2O3 catalyst under ambient pressure and 50% H2 concentration. See full story at Nature Communications.